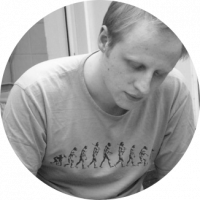 Jon's focus is on content, working from the initial outline, through the development of the authoring tools, to the writing and scripting of final content.

Previously, Jon was a lead designer at Sony Computer Entertainment Europe, and before that a secondary school teacher, so he loves to talk. He's a published author of short stories and over a decade's worth of award-winning interactive fiction.

In the past he has also played jazz trombone, led an improvised comedy troupe and edited a film review site, but he now lives a quiet life in Cambridge with his wife, two children and cat.

Jon Ingold is speaking at the following session/s

Being Boring: How Less Innovation Made Overboard! a Hit

Indie studios are known for taking risks and trying out bold new design that shape the future of the whole industry. But why should indie be the unpaid R&D arm of big studios? Small devs have a different superpower - speed. In this talk, narrative director of inkle, Jon Ingold, will detail how not being innovative, and taking as few creative risks as possible, allowed the award-winning studio to produce Overboard!, a hit game with a fresh concept and +85 metacritic, in just 100 days.

inkle were shortlisted for their game Heaven's Vault in the Develop:Brighton Indie Showcase 2019.