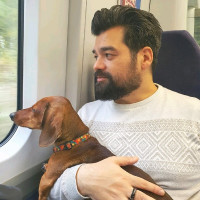 James Gourlay is the Director of Digital Strategy for Curve Games but started his career as a QA tester for SEGA Europe and Lego games creator TTGames. James then joined SEGA’s Electronic Software Distribution team in 2014 where he spent the next 7 years assisting SEGA’s transition to a digital business. This resulted in James becoming SEGA’s expert with strategies for launching PC titles on Steam, while securing the product key distribution network from unauthorised or fraudulent activity. During his time at SEGA, James strived to find new and interesting ways to use the tools that Steam offered resulting in features being officially adopted on the platform. A couple of his favourite contributions involved: • Finding a way to add unsupported gifs to the store page of Total War: Warhammer I, which was officially supported by Valve after it became a popular request from other publishers. The impact of this can be seen across Steam product pages to this day. • Assisted with bringing live broadcasting to the platform, allowing marketing and community teams to present gameplay in a format that the communities had become more familiar with. James was also a founding member of SEGA’s Tech Ops team which created and enforced the standards for porting Japanese developed games to PC. The results of this work can be seen directly through the successes of the Bayonetta, Vanquish, Yakuza franchise and Persona 4 Golden ports on Steam.

James Gourlay is speaking at the following session/s

An entertaining and informative talk for developers and publishers from someone with plenty of experience of releasing games on Steam. James will cover what he considers to be the ten most important things to consider when releasing a game, including: • Getting the coming soon page right • Convincing people to add you to their wishlist • Correct and relevant tagging • Post-launch support And plenty more – you’ll need to come to the talk to get the full list! James will cover the entire release process, from the early steps of getting your game a Steam page through to building hype, launching, and then maintaining momentum with strong post-launch support. As Director Of Digital Strategy at Curve Games, James Gourlay has helped launch many games over the years and learned invaluable lessons that are guaranteed to make your life easier and your game more successful!