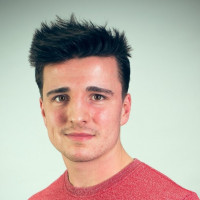 Cal Armstrong is an Advanced Engineer in SIE PlayStation's Audio R&D team in London who are currently developing for the Tempest 3D Audio Engine on the PS5. He graduated with a master’s degree in Electronic Engineering from York in 2016, following on from which he received his PhD in optimised binaural rendering and Ambisonic related processing. In 2018 he released the SADIIE database, a collection of over 60,000 binaural measurements including HRTFs, BRIRs and headphone EQ filters for humans and dummy heads. He later went on to develop an alternative time-constrained near-field HRTF capture system suitable for more commercial applications. He has been involved in the standardisation of the Immersive Voice and Audio Services codec for 3GPP and is a published author within academic literature and patent applications. He's a big fan of chocolate and enjoys hours spent at the gym.

Cal Armstrong is speaking at the following session/s

3D Audio in Games: What, Where, Why and How?

3D audio provides the player with a new dimension for listening, increased localisation, and unparalleled sonic immersion. It is one of the leading features that separates the current generation’s gaming experience to previous generations.

However, the shift away from traditional channel-based rendering requires the addition of 3D Audio objects and Ambisonic tooling to developers’ workflows. For 3D Audio to be effective, it is important to understand what is happening throughout the audio chain and how to exploit these new tools.

This talk will give you a bottom-up understanding of what 3D audio is, from state-of-the-art research to implementation.

Focussing on the practical application of tooling within general audio mixing and specifically within a game environment, we will discuss how to combine approaches to achieve a desired effect.

Finally, we will share some of our best practices and tips for the use of 3D audio on the PS5.