What's On 2020 Speakers Will Freeman

Will is a freelance video game journalist who does all kinds of other work in the games industry, serving as an editor, author, event curator, copywriter, awards judge and sometimes script editor. While he writes for the national and gaming press – from The Guardian to Eurogamer - he also frequently serves industry publications, having formerly stood as the editor of Develop magazine. Beyond writing about the industry – and its people, technology and culture – Will is a devotee to arcade gaming. He’s also a competitive yo-yoer, and in 2018 won an actual UK champion trophy; it’s plastic…  and from the beginner division.

Will Freeman is speaking at the following session/s

KEYNOTE: Twenty Years of Designing Games, Managing Teams and Learning to Make Your Own Luck

Creative Director at PlayStation and Pixelopus, Dominic Robilliard, sits down in this fireside chat to discuss his 20 year career in the industry.  The discussion will cover his beginnings in QA at SEGA, then starting in design at Sony London Studio, working on such titles as The Getaway Franchise, and 8 Days.  During his time at Lucasfilm/LucasArts he got a taste for full scale AAA but also small team development with the Special Edition re-release of Monkey Island and Lucidity (LucasLabs). If we are lucky, Dom might share his experience of working with George Lucas for two years as the director of Star Wars 1313.

He’ll talk about how his past influenced his current passion project: PixelOpus and managing a team made of students and recent graduates having their first experience in the game's industry. Mentoring them from their first small project, Entwined and growing them to a more senior team capable of Concrete Genie and beyond. Dom's passion for gameplay driven narrative, managing large and small teams, and breaking into the industry will be an exciting 45 minute session. 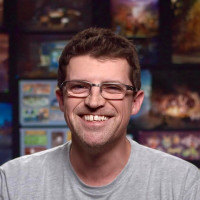