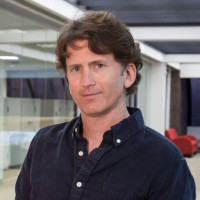 Todd Howard is a designer, director, and producer at Bethesda Game Studios. He joined Bethesda in 1994 and has created some of the industry’s most successful games by pioneering open world gameplay.

He has been honored as one of the world’s top game creators including The Academy of Interactive Arts and Sciences’ Hall of Fame, the Game Developers Conference Lifetime Achievement Award, Germany’s Lara of Honor, GameLab Spain’s Legend Award, and the New York Game Critics Legend Award. GamePro magazine named him to the Top 20 Most Influential People in Gaming over the Last 20 Years. He was named Best Game Director by the Academy of Interactive Arts and Sciences in 2012 and 2016. Mr. Howard is one of the only developers to create four Game of the Year winners in a row with Oblivion, Fallout 3, Skyrim, and Fallout 4.

He was an early pioneer of open 3D worlds, creating the PC's first 3D shooter with mouselook in 1995 with The Terminator: Future Shock, and pushing world creation and player modding in 2002's breakthrough The Elder Scrolls III: Morrowind.

Mr. Howard is currently directing Starfield, Bethesda’s first new gaming universe in over 25 years. Following that he is set to direct The Elder Scrolls VI, the follow-up to the landmark Skyrim.

He directed Fallout 4, released in 2015 it once again became a rare combination of critical and commercial success. Fallout 4 won multiple Game of the Year awards including the 2016 DICE Award and the BAFTA. It was E3’s Best of Show for 2015 and broke sales records worldwide. He also directed Fallout Shelter, the studio’s first mobile game, which quickly became the #1 App for both Apple and Google, and also won Mobile Game of the Year.

Prior to that, he was Game Director of The Elder Scrolls V: Skyrim, one of the most critically acclaimed and best selling games of all time. Released in 2011, Skyrim won over 250 Game of the Year awards from the Academy of Interactive Arts and Sciences, Game Developers Choice Awards, VGAs, and more. Bethesda Game Studios was also named Studio of the Year at the 2011 VGAs. Many outlets later named Skyrim “The Game of the Generation” and PC Gamer ranked Skyrim as the #1 Game of all Time.

He was Game Director and Executive Producer of Fallout 3, the 2008 winner of E3’s Best of Show, and Game of the Year from the Game Developers Choice Awards, The Associated Press, and more. Prior to Fallout 3, he led the creation of The Elder Scrolls IV: Oblivion, the 2006 Game of the Year winner from the Academy of Interactive Arts and Sciences, VGAs, and more.

Mr. Howard is a graduate of the College of William and Mary and serves on the Board of Directors for the Make-a-Wish Foundation Mid-Atlantic.

Todd Howard is speaking at the following session/s

This year’s Develop star Award winner Todd Howard reflects on 26 years in the video game industry, from 1995’s The Terminator: Future Shock to the upcoming Starfield and The Elder Scrolls VI.

During this fireside chat Todd will share some of the highs and lows of making games spanning multiple decades, platforms and genres. Starting out as a designer and producer at Bethesda in 1994, Todd rose to fame as game director for The Elder Scrolls and Fallout series. The two enormously successful, critically acclaimed RPGs allowed Bethesda to expand into other development studios and publishing offices around the world. 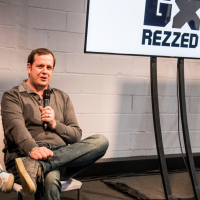