Blog Guest Blog: Why speak at Develop:Brighton?
My first speaking opportunity at Develop:Brighton was after applying to a call for new/first time speakers. The format was each new speaker would have a few minutes on stage to argue a case/put forward an idea that they would like to win a talk spot for, for a full talk at the following years conference. Initially there was about 12 speakers lined up, that soon dropped to 6 and I was the only remaining female speaker, and as such I was asked if I would still like to take part.

It’s not new for me to be the only women in a situation, games were my hobby long before becoming my career and I’ve lost count of the number of times I have been expected to defend my validity, but still I was disappointed. I had been looking forward to seeing so many new voices on stage, voices our industry so desperately needs to hear, voices that let the other women in the audience know they belong, voices that encourage other women to join in. Luckily I’m quite a competitive person and being the only female speaker left in the competition only strengthen my resolve to slay my fellow new speakers (spoiler - I won). 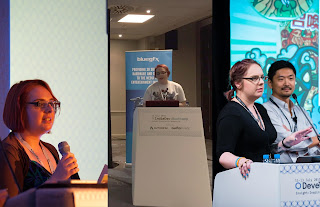 Here I am, standing at lecterns talking about games!

My soapbox rant, sorry ‘mini talk’ was about why we should hire more parents into the industry. There are many reasons, not least of all because at that point I had a 1 year old daughter, but most importantly I did the talk because we see so few female speakers at events, and even fewer mothers. My journey into independent game development started when I was 5 months pregnant, between jobs and totally unemployable. My first indie game was released 2 weeks before my first baby was born and when she was around a week old I was multitasking breastfeeding and storefront asset generation for the Android release of Glyph Quest. As much as I knew what I was doing was impressive (game dev with a tiny baby is not easy) I didn’t realise how important my story was for others to hear until I started talking about it at events.

Since I started sharing my experience, I’ve had women at each talk come up to me afterwards and thank me. They were at a point in their career, relationship and life where they were thinking about having children but were unsure how such a move in this male led industry would affect them. Now, I can’t speak for how bigger studios handle maternity/paternity and the struggles of returning to work but what I can tell you is it is possible to work up to the due date (I have, twice) and having a child doesn't mean you suddenly forget how to do everything you did before you got pregnant, you just have to learn how to do some of those things with one hand whilst the other is clamped around a wriggle monster. 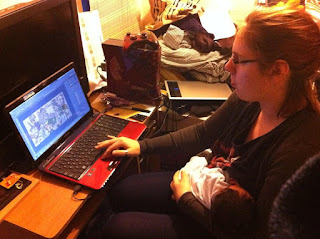 #Multitasking
You may not feel your experience or you presenting what you do is that big a deal, but it is to someone. Even if it’s only one person you encourage to get into games dev, stay in games dev or change the sex of their games protagonist, it matters. Representation is getting better, it’s changed a lot in the time that I’ve been a developer, but we still have a way to go and we’ll only get there if we represent. So tell your story, sign up as a speaker at this years Develop:Brighton conference and I look forward to meeting you there. 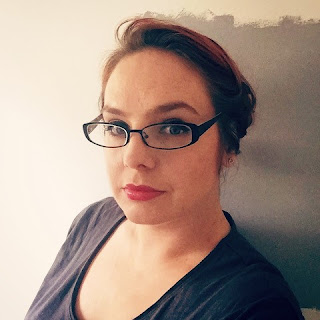 Leanne Bayley from We Heart Dragons is a member of the Develop:Brighton Advisory Board
SIGN UP FOR UPDATES