Blog Guest Blog - Why My Mum Likes VR Better Than You Do
“How do I put this thing on,” she said, looking warily at the VIVE headset and controllers. Mum’s not a gamer; she’s never so much as dropped a quarter in an arcade machine, let alone picked up a console control. Hell, she struggles with her smartphone. “This is heavy,” she sighs, as I fit her with the headset, and guide her hands through the controller straps. “Ok,” I said, “I'm going to turn on a game called ‘Space Pirate Trainer’. It’s really easy, you have two guns, you pull the trigger on your controller (I showed her where they were), and you shoot the floating orbs that are trying to shoot you.  Don’t let them hit you.” As I started the game she gasped. “OH MY GOD, I'M IN SPACE! CAN YOU GUYS SEE THIS??” The last thing I said as I popped the headphones over her ears: “Use the gun in your right hand to shoot the box that says ‘Play’. Have fun.” And then I got the hell out of dodge. 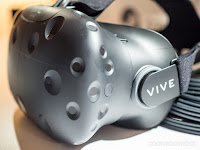 My mother is 61 years old, somewhat arthritic, but still relatively spry. I watched, grinning, as she transformed from a prim and proper real estate agent into her own personal incarnation of Lara Croft. She ducked and weaved; she hurled strings of four-letter-words at the robots. I do believe she accidentally kicked the cat at one point (he hasn't forgiven her yet, poor kitty). And when she “died”, she wailed “NOOOOOOO”, immediately followed by, “I want a do-over.” Before I could say anything, she’d hit the Play button and was back in. Her only break was when we had to tear her away for Mother’s Day brunch, but all in all, she played SPT, Fantastic Contraption, and messed with the IKEA demo (“I wanted to rearrange the cabinets! This is a let-down…”) for roughly 3 hours. On the other hand, my twenty-something brother-in-law, who plays a lot of WoW and Call of Duty, etc, tried it out, and got bored after about 15 minutes. “That’s nice, I guess,” he said. “But I don’t think it’s worth the money, and I'm just in a room here by myself.”

This kind of engagement - for lifelong non-gamers to suddenly become avid enthusiasts – is practically unheard of in previous iterations of game evolution. Yet change is generally difficult for the established culture/mindset to adopt (hence the addage “you can’t teach an old dog new tricks”). So why is VR, this cutting edge technology, more attractive to older people?
My theory is twofold: First, that because the controls are still very crude, the games must be designed simply. The quality of a game becomes more reliant on storytelling, visuals, audio, and ease of navigation. My folks still go on dates to the movies 2-3 times per month. They watch whatever movie or show BBC America is running. They want to the entertained, but in a way that’s low effort/thinking on their part. Gaming, for them, is “too hard”. But VR is easy.

The second is that the GenX/Boomers came of age in a time where real life experiences were tantamount to electronics/media. VR is the first tech where games truly emulate real life. Finally, here is a technology tailor-made for the vast majority of older people who grew up wishing they’d done something different with their lives (because no one gets to maturity without some kind of regrets). Not because they don’t like what they have or what they have done, (read: anyone who can afford VR is probably doing well for themselves), but because they wonder what it would have been like to be a musician instead of a sales agent, or an artist as opposed to an engineer. Well, turns out it’s not too late; now you can live those imagined lives vicariously through… you. Wanted to try Alpine downhill skiing but didn't because it was “too dangerous”? Not any more. Decided against that summer of slumming it in Paris to save up for a “practical” home downpayment? You can still waste a few hours at an outdoor café (with a view of the Eiffel Tower!) catching tidbits of murmurs in French. VR lets you be someone else for a little while, gives you a mental escape. So why aren’t younger generations just as excited about all the opportunities VR offers?

Millenials, unlike previous generations, are exceptionally self-actualized. VR is a nice distraction, sure, but it’s still a game, albeit really cool. However, Millenials want more. They don’t want to just watch a 360º movie, they’d rather actually go to these places or do these things. Being “in the game”? That’s nice, but Millenials want to control the story and change the outcome. This is now the challenge for VR developers: How do you create an authentic, fulfilling experience? What will it take to make VR indistinguishable from the real thing? That’s a question we’ll be able to answer hopefully in the next few years.
The good news? A healthy market for which to create content already exists. Right now, folks like Mum (Boomers and Gen X) are quite satisfied with today’s tech. When she finally put the headset down, smiling, she wiped the sweat off her brow and quoted a phrase I'm very fond of using: “We really are living in the future.”
Sophie Wright is the Product and Brand Evangelist for Human Interact, currently working on an unannounced VR project. 15 years of experience in an engineering leadership role led to a passion for exploring and sharing the possibilities of VR. In this reality, she enjoys gin, tinkering with her Mini Cooper, meteor showers, and having meaningful experiences with people.
SIGN UP FOR UPDATES