Blog Guest Blog: Virtual Reality is Having Real Impact on the Health Industry
We talk a lot about the potential benefits of VR across a number of areas, talk is all well and good, but actually seeing how it can be applied is when the potential hits home and becomes real. 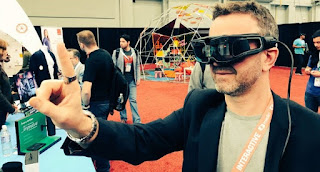 Last year at SXSW in Austin, I was lucky enough to meet Sook-Lei Liew, a neuroscientist from USC who had created an incredible VR prototype for treating stroke victims. Combining a swim cap, a standard laptop and an off the shelf HMD she createdREINVENT (which stands for Rehabilitation Environment using the Integration of Neuromuscular-based Virtual Enhancements for Neural Training). Yes they worked hard on that acronym!
This Social VR application uses EEG sensors to provide neuro-feedback when an individual’s neuromuscular signals indicate a movement attempt, even in the absence of actual movement. Stroke patients could retrain their brain to move muscles that have been affected by the stroke - relearning the right brain signals by which to move a virtual arm, which can ultimately lead to them being able to use that rediscovered ability in reality. 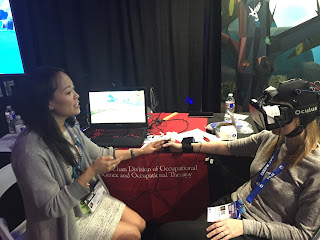 I came across a great comment from Mel Slater, a professor of virtual environments, where he talked about the ability to trick the brain: “There is some level of the brain that doesn’t distinguish between reality and virtual reality. A typical example is, you see a precipice and you jump back and your heart starts racing. You react very fast because it’s the safe thing for the brain to do. All your autonomic system starts functioning, you get a very strong level of arousal, then you go, ‘I know it’s not real’. But it doesn’t matter, because you still can’t step forward near that precipice.”
It is the natural reaction that Sook-Lei Liew is utilising with REINVENT, less of a trick, but more like an immersive rewiring of the brain.
As we gain a better understanding of the uses of immersive technology to address key health issues, the number of solutions will grow exponentially. From training surgeons, treatment for depression, to pain relief, the impact immersive technology will have on our collective health will fundamentally change the whole health industry. We’re entering an exciting period of innovation.
SIGN UP FOR UPDATES