Blog Guest Blog: The Possibilities of VR
It is 1911 and the Paris art world is alive with excitement about a revolution in art. The Salle 41 artists have just taken part in the first organised exhibition of Cubist works; images that broke down conventional depictions of space, mass, volume and time. Their work, based on ideas developed by Pablo Picasso and Georges Braque, went on to drastically change world art, as developments and reactions to it led to the creation of modernism and beyond. The power of the movement broke through to other genres such as music and architecture and has revolutionised culture and society through the 20th Century and into our time.
It is 2017 and the revolution of AR/VR/MR is about to begin. In as significant a way as the Cubist’s broke conventions of perspective, so AR/VR/MR is transforming our relationship with that thing we hold most highly in our culture - the flat screen. We can now enter amazing unseen worlds, we can bring digital creations through into our world, and interact with them in our visual spaces, we can be immersed in stories and experiences in a way beyond anything that has come before.
I have to admit I was cynical at first of the possibilities of it all - another 3D TV, another gimmick - yet as we developed Drop Dead at Pixel Toys, the possibilities of VR became so apparent - how a Samsung phone in a relatively simple headset could deliver a hugely accessible, immersive VR experience to a mass market, how we could tell stories in such a fresh way. Still the barriers of technology are falling continuing to fall at a dramatic rate: Apple’s significant entry into the AR field with AR Kit will surely speed the adoption and integration of augmented content into mainstream life - particularly as marketers (for they are the primary drivers of mass acceptance surely) begin to invade our lives with interactive enhanced messages.
A wonderful thing is that our Picassos and Braques are out there right now: artists, developers and creatives taking these nascent tools and pushing them every day to new extremes. Like Cubism and Modernism before, this won’t be limited to a single genre but will be suffused through contemporary culture. VR is already embedding itself into training programmes for doctors, firemen, even fast food outlets. It is entering the world of manufacturing, business, entertainment, games, art. The Royal Academy of Arts, once the bastion of traditionalism, recently hosted an exhibition of VR artworks created by some of their students, and plans further exhibitions in the near future. Jaguar Land Rover use hi-definition VR content to shape their cars as part of their pre-production design and as part of their customer facing sales strategy.
Ultimately the reason for this now inevitable revolution is that VR/AR/MR changes our relationship with the world around us, in much the same way as modernist principles did last century. We need to simply embrace the enormity of that and as developers prepare for the opportunities that this technology affords for creatives, businesses and consumers. 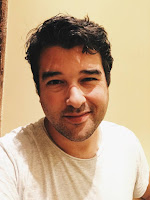 James Horn is lead artist at Pixel Toys and will be speaking at Develop:VR with his session entitled - Drop Deadline - A Visually-Excellent, 60fps, Narrative Mobile Shooter to a Fixed Deadline With a Small Team
SIGN UP FOR UPDATES