Blog Guest Blog: Stories Are Places We Go To

When you think about your favourite place, I bet it’s not just a location – it’s the people who are there with you, and the things you are feeling. It’s a magical place. I think the job of a storyteller, particularly a visual one, is to elicit wide-eyed, open-mouthed wonder from their audience. And great stories make us feel like we belong inside them, they transport us to different places.

When you experience a good story, you feel like you’ve gone on a journey, returning to your own life changed by the experience. The first time I saw The Breakfast Club when I was 15, I felt like I came back older, wiser and a bit taller. And I remember watching Urotsukidoji: Legend of the Overfiend one afternoon when I should have been in school and emerging blinking into the sunlight a changed person. That was a seriously messed up place to visit, especially on a Tuesday. 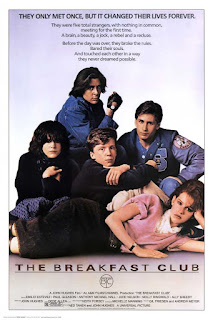 I read somewhere that stories are survival training, giving you a chance to try things out in a safe environment before you might need to face them in real life. In hero’s journey structures, there’s always a phase where the protagonist acquires and tests out new skills before they master them in order to triumph in the climax.
Like dreams, stories are places we visit in our minds. The fantastical, and unsettling, nature of dreams and stories intertwine in cinema, television and games. Nightmare on Elm Street is a brilliant example of this, or the work of David Lynch, like the creepy scene in Mulholland drive where a man has brought his friend to a diner because he has dreamt about being there with him, and being scared. The source of the fear is a third man, “in the back of this place”: someone so scary that our erstwhile hero hopes never to see his face “outside of a dream”, yet before we know it, he’s headed out back to see if the man is really there, at which point Lynch switches the a point of view shot and we become the man, travelling towards the place which terrifies us. 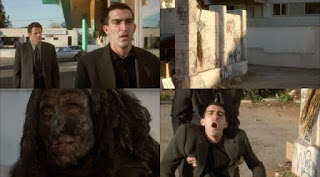 In Back to the Future, we find ourselves aligned with the hapless Marty McFly, struggling at home with our cowardly father and alcoholic mother. However did these two deadbeats even wind up together? The mum recounts the story of how they met, but something doesn’t ring true. Marty ends up visiting the story himself by travelling back in time. In doing so, he smashes the story to bits and has to piece it back together in order to return home. Back at home in his own time, he momentarily becomes a helpless observer in his own story, watching as his friend Doc Brown is shot down. 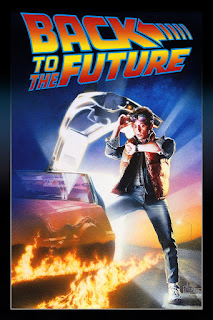 I’m rambling on about this stuff because I think it’s particularly interesting given the surge in 360 degree video and virtual reality; advances that might herald a new era of immersive storytelling. Anyone who’s a cinephile and telephile knows what its like to want to live inside a favourite film or show. Good stories have always allowed us to do that, but using head-sets and 360 degree environments, we might take one step further.

I got really excited when I first discovered you could create interactive video that responded to what the viewer was doing: sharing control with the viewer over how the story unfolds rather than it carrying on regardless. Edits and music that change dynamically depending where the viewer is looking or what they are looking at with their mouse cursor (now finger). My first major foray into this world was a horror experience called The Burning Room, and I still love the sense we managed to instil of being present in a haunted place. 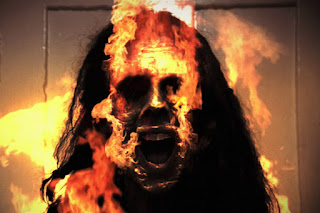 Sitting in a cinema or living room while the stories play out on screen allows you to experience love, terror and everything in between while simultaneously feeling the comfort of not really being there, of the characters being oblivious to you spying on them. Some filmmakers have played with this brilliantly, like Lynch’s POV shots, Michael Haneke acknowledging our complicity in his brutal Funny Games, or the classic fourth wall breaks in comedies. Deadpool prides itself on having a fourth wall break within a fourth wall break; “That’s like, sixteen walls!”
When you are free to look and roam around inside a story world, there’s potentially even more fun to be had with these concepts. Like immersive theatre in which the characters/actors are simultaneously aware and unaware of your presence. You can be acknowledged or ignored, the centre of the action or on the periphery. Perhaps you get left in one place while the story is happening down the corridor and its up to you to go and find the next act. Like real life, you can be anonymous in a crowd, a star in the movie of your life, or free to explore and find meaning – assuming you’re not supposed to be at school or work, or perhaps then also.

Stories are places we go to. Good virtual reality stories could be places you want to stay.

Jon Aird
Producer, writer and creator with a track record in making smash hit projects across online, social media and TV. Passionate about future trends and harnessing technology to delight audiences. Past projects include the BAFTA award winning digital Psychoville Experience and the viral hit interactive video The Burning Room.
Jon will be delivering a session at 11.15 on Thursday 14 July entitled Virtual Reality Thrills, Spills and Bellyaches
http://www.jonaird.co.uk
SIGN UP FOR UPDATES