Earlier this month, we hosted a 24hr Oculus Touch VR Hackathon at The Old Market Theatre in Hove, UK as part of their #TOMTech series of events that run over the course of the month-long September “Brighton Digital Festival”. 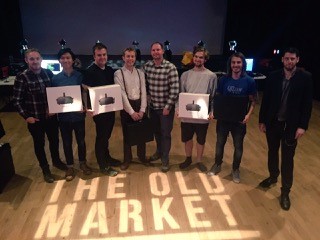 The lucky winners clutching their prizes, with judges from Unity & VR Focus

The purpose of holding the event was to allow access to unreleased technology that many indie developers interested in Virtual Reality hadn’t been able to get their hands on, as well as expanding knowledge and understanding of VR development as a whole, whilst promoting community and building relationships within the local area.

Attendees came from nearby or far away, with one flying over from Prague specifically for the event as Oculus Rift is not available there yet, let alone the Oculus Touch motion-tracked controllers. Over the course of a day, night and a bit of the following morning, two working minigames were created as a result and the winners judged by representatives of Unity and VR Focus.

We decided to include the two working mini-games into the vrLAB showcase (something we were also co-hosting at the theatre over the following few days) as a reward to the developers.

In a short period of time, we were able to reach out and gain support direct from Oculus through our existing relationship manager, via the provision of Oculus Rift VR headsets and Oculus Touch controllers for the teams to use. Sponsorship came in the form of last minute saviours AMD providing x5 VR-Ready PCs so that each team had a VR-capable machine to develop / test on.

Food and drink was provided by our other main sponsor Unity, who have a local office in Brighton and love to support the community. Promotion sponsorship was assisted by local organisations Wired Sussex and Brighton Digital Catapult Centre who are co-sponsors of the overall TOMTech events.

Whilst this was our first hackathon / gamejam that we had organised and it was successful overall, there were some key lessons we learned that will share with you now, ready for next time or if you want to host your own. We had reached out to a couple of seasoned gamejam and VR hackathon event organisers in the US, namely Eva Hoerth (@downtohoerth) who provided some excellent advice, which will be included below.

Uniquely mostly for the event we ran in relation to the subsequent VR showcase, remember also that things created quickly aren’t going to be the most stable or bug-free finished products, nor are they necessarily going to be designed for repeated use by the general public at that state of development.

Whilst putting the resulting two finished mini-games into the vrLAB showcase was received very well by all who tried them, bugs and real-world usage resulted in more time than expected having to be spent running the installations and even a couple of Oculus Rifts getting broken. But they had fun, we had fun and we would totally do it all again (in fact we will be in December, watch this
space…)

Sam Watts has been involved in interactive, immersive content production for over 15 years, from learning development and simulation to AAA and casual games. Currently employed as Operations Lead for Make REAL and Game Producer for Tammeka, he keeps busy by evangelising the possibilities and real world benefits of immersive technologies like VR and AR to anyone who will listen. Tammeka’s first VR game ‘Radial-G : Racing Revolved’ launched alongside Oculus Rift in March and HTC Vive in April 2016. Make REAL are currently powering the McDonald’s “Follow Our Foodsteps” VR farming experiences at numerous agricultural and countryside shows around the
UK.