Blog Guest blog - First impressions of the great wall
It is my first visit to China and I have been both scared &  excited for the previous week about this trip. As a new indie, an exploratory trip to China is a speculative luxury. But when I was invited by an old friend to join a cross border investment roadshow I decided to take the plunge, just as I did when I left Sony 3 months earlier. 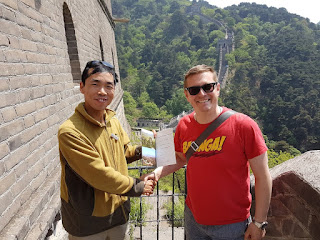 As I am travelling on airmiles I had to leave a day early, but at least this gave me a day to visit China's most amazing construction, the great wall. And what a sight. Just the basics are astounding. 5500 miles. 1 million workers. 4 trillion bricks. A seemingly impossible task, just like starting a studio. But they broke the wall down into sections & subsections, dividing it into more manageable sized tasks. Good advice for me as I see the enormity if my own ambitions ahead of me.
And after a few days being here, meeting other CEOs, startups & investors from China and silicon Valley, I realise that the great wall itself is like a reflection of China today. 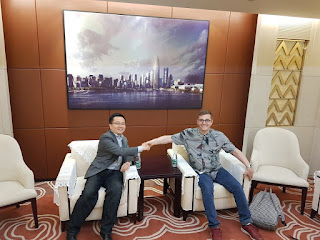 Firstly, the scale of China is staggering. There are 1.4 billion people & 560 million smart phones. Email has been leap frogged and everyone uses wechat to communicate, send files &  even pay for stuff. As a new market it is simply huge, and it is interesting to note that Western platforms like Facebook messenger lag behind the functions on offer from their eastern equivalents. They openly admit they are good at copying, but what seems obviates a couple of days is that they also improve on the original by using a very pragmatic approach to design & development. Another great takeaway for an aspiring startup.
Wealth. The great wall didn't come cheap. It was a huge investment of time, money & infrastructure on an incompressible scale. Everyone I meet tells me there is a ton of cash in China and they are keen to invest abroad. For tech that translates to silicon Valley so I am a bit of a novelty coming from the UK. Although it doesn't seem to put people off. They do however, have clear guidelines as to how to evaluate you as an investment. (see 5 steps at the end). 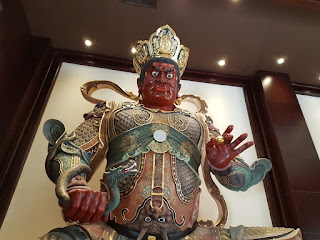 I have asked a few people where the money comes from with a variety of answers.
Power. With wealth comes power and there are clearly many power structures here. From the SOEs (state owned enterprises) which we are warned against due to their red tape and misguided targets (volume as opposed to performance of foreign investments) to the huge publishers &  investment houses, enough to make even Mr Zuckerberg blush.
Control. The control required to harness 1 million workers to build the wall is difficult to comprehend. Imagine being the lead producer on that project, with your life at stake for missing a milestone. But with control comes protection. The wall was built to keep the marauding mongels out. If food was scarce they would raid the Chinese villages. And now there is the great firewall of China, designed to protect the citizens from the evils of Google, Facebook & the like. It can be bypassed by vpn clients, but these are flaky & intermittent at best due to government attacks to bring them down.  A personal realisation is just how much I rely on these platforms and services. And more useful advice for me, always look after my team. 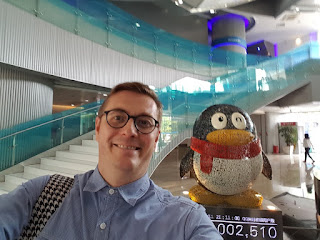 Achievement. And finally, What an achievement the wall is. It would be impossible today, even in China. It is clear to me that people here pride themselves on personal and societal achievement. Before coming, many friends told me how crazy it would be, which is true. But actually, I am really impressed by the infrastructure. There are tough traffic jams, but let's be honest, London is no picnic in rush hour, neither is LA (#firstworldproblems?) the outlook by most people is optimistic although I pick up similar concerns from the younger people of the impossibly high housing costs in the affluent cities.
The difference here is that top down control is in force again. Drivers must forgo using their cars one day per week (eg everyone whose registration number ends in 2 or 4 cannot drive on a Wednesday) with heavy fines as penalties.  Interestingly, the structure is designed for overall efficiency much the same way we organise our development teams. There is a clear influence from californian startup culture and everywhere has incubators or wework equivalents. Allowing teams to focus on their key goals.
I will sign off with some great advice I was given by a Chinese American as to how he evaluates a company to invest in.
1. Geography. Is the economy stable?
2. Sector. Is the business in a growing sector? (games &  vr both pass this with flying colours)
3. Is the business model sound?
4. Is the team good, great or outstanding?
5. Is the product worthy of investment?
My final thought is this. I am near the end of my trip and I have learned much more than I ever expected. And just as I have fallen in love with the majesty accomplishment of the great wall, I am falling in love with the county & culture of China itself. This is my first trip and I very much hope it is not my last. One of the developers I met here gave me some advice...  Maybe use some Chinese architecture in my products to help them sell in China... I think I will, and actually, I think it will help them sell in the rest of the world too.
Dave Ranyard is a virtual reality developer.
SIGN UP FOR UPDATES